Graze is exactly the right word. I could come here to eat everything on the menu. And, the dishes we did eat were perfect. The majority of the time, one would consider a side or ingredient less than ideal. No, not tonight at Graze. 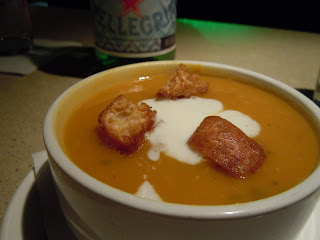 Butternut Squash Soup: Hot, with spices, and not too sweet like most butternut squash soups. The croutons added a crunch to it. I eventually dipped the bread in it. Puts any tomato soup to shame. Well, haven’t tried Graze’s yet. 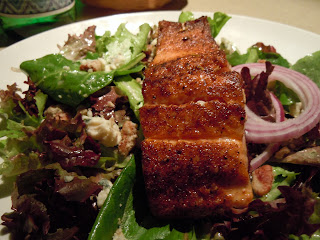 Salmon Salad: Medium cooked salmon, seared crisp, over field greens, red onions, candied nut, crumbled blue cheese, and vinaigrette. Wish I could do it justice with a better description. It was so filling, even though it was a light salad. It’s out of the ordinary that I would order this, since I’m more of a hearty eater (think burgers and fries,  entree and sides, yes, I eat a lot). 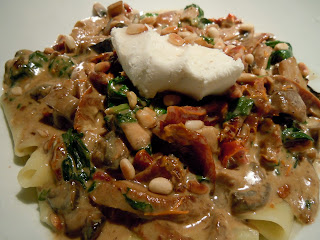 Wild Mushroom Paparadelle: Beautiful fat flat pasta in wild mushroom sauce, with roasted tomatoes, with an intense aroma of truffles. Had to restrain myself from eating most of my husband’s. 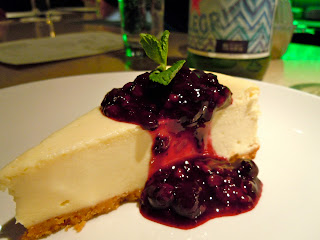 Goat Cheese Cake with Berry Compote: It does look sweet and rich. However, it is far beyond what you would expect from a grocery store or franchise. It is texturally right, with hints of salty and sweetness.  It is just enough for an after dinner treat.
The bad: I wish I could find something less than perfect about this place.
The good: Graze has good service, good atmosphere, and great menu items. Even as we ate, we eyed dishes passing us, wishing we could have tried this...or that.  But, our stomachs have so much room. Graze’s lunch menu seems just as amazing. The beverage menu is good too.
In conclusion: We are sure to continue talking about our experience at Graze. You would be able to taste the attention to detail. We WILL return, without a doubt, and graze more.

Posted by Palate Profiler at 11:18 PM No comments:

Yes, YES! Charleston needs more ethnic foods, and we welcome Dutch street food at Patat Spot Friet & Falafel. It's almost like I've been waiting for something like this, and it's another reason why College of Charleston students are spoiled, or will be (because they can use their off-campus meal plan). It wasn't until I finished eating that I realized that this restaurant is vegetarian, and to be honest with you, I didn't miss the meat.  To introduce it to you, Patat Friet is their Belgian style fries (with toppings or sauces if you prefer), and their Falafel is a Mediterranean spiced chick pea cake. They have a beautiful variety of ingredients at their Salad Spot like picked cabbage, apple/fennel coleslaw, Israeli salad, guacamole, and sauces to name only a few. 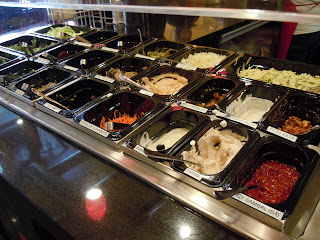 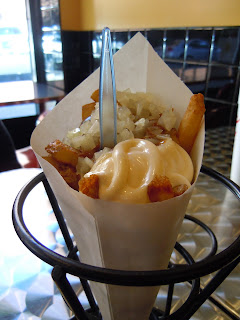 Patat Friet with Patatje Oorlog (traditional Dutch favorite: Frietsaus, sate sauce, chopped onions)
We also had the Viva Italia with white truffle oil and parmesan. So yes, there are plenty of ways to eat Friets. It makes it more like an entree too. 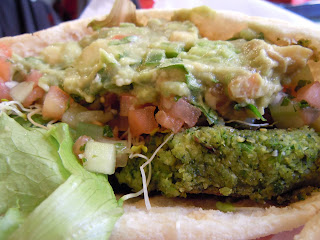 Falafel (two cakes within pita bread, added whatever I wanted at the Salad Spot)
Also, you could get the falafel fried or grilled. I had one of each. Falafels here are made of chick peas, fava beans, fresh mint, cilantro, and parsley. 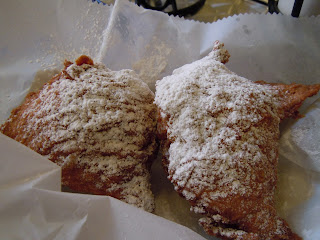 Oliebollen (Dutch doughnut)
I really appreciated this dessert not being too sweet. And it could easily be an appetizer.
The bad: It's a place I couldn't get to as frequently as I would like. Long distance from home. Bad for me.
The good: I hope this place with be the first of many ethnic foods to be in Charleston. Maybe they will follow in Patat Spot's footsteps. Thanks for introducing Charleston to Dutch street food.
In conclusion: Having a meal at Patat Spot will leave you, first of all, refreshed, from the fresh ingredients they use. Secondly, you will smile from the satisfaction from the flavors. Thirdly, you would not have realized that vegetarian tasted so good.

Posted by Palate Profiler at 8:19 AM No comments:

Did this restaurant really just open in December, because it feels well established. The experience at Eurasia in Mt. Pleasant can be extensive to blog about...and all good things. Where do I begin? First off, great name to describe American flavor, Asian influence. Kind of like me. 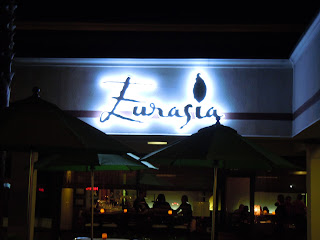 Posted by Palate Profiler at 10:43 PM No comments: